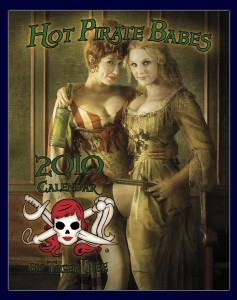 I’m still putting 2008 on my checks, and here comes the 2010 Hot Pirate Babes Calendar. How the time flies.

I’ve reviewed the previous three incarnations of this calendar, so feel free to read those reviews if you *really* need an explanation of just what a “hot pirate babes” calendar contains. The rest of us, however, shall jump into the nuts and bolts of the matter and consider just what 2010 appears to have in store.

As with other years, the 2010 calendar features a range of pirate babes, some of whom hit the “hot” mark with more grace than others. Five months, in fact, offer babes of reasonably passable hotness. February brings us a gypsy gal for those who prefer their girls to exercise a little modesty (in the face, if not exactly elsewhere), while April offers a “cossack adventurer” babe who sports a fine, original outfit to accompany a somewhat sour facial expression. This hot-if-cranky babe also boasts the remarkable skill of wearing stiletto heels on a sandy beach without falling over backwards – a feat shared by many of her 2010 cohorts. July, August, and September also feature very decent hot pirate babes, although Miss September needs to learn that a cravat is *not* a suitable below-the-waist undergarment (imagine a modern hot babe wearing a necktie for a pantie – not a great move.) August, however, features a gal straight from the hot pirate blond bombshell school of preference, while July offers something for those who prefer a lady that can actually look tough-yet-sexy – not the easiest balance, surely.

2010 does have three ladies who sadly miss the mark – not necessarily through an inherent lack of hotness, but due to strange posing or apparent discomfort in front of the camera. Miss May clenches a dagger between her teeth and bends towards the viewer for no apparent motivation save showing off her respectable cleavage, while Miss October just seems entirely lost and lopsided (seriously, the lighting makes one boob appear four times larger than the other.) Plus, being as the fashion is half the fun of this calendar, it’s a shame that her sparse clothing is lost in shadow and pretty much unrecognizable. Our final not-so-hot babe is Miss December, who is decked up and posing as a British Guard. Not only does she repeat Miss Septembers cravat offense, but her utter lack of clothing combined with soldier’s pose makes me feel less inclined to woo her and more to just feel bad for the poor girl who forgot to get fully dressed before going to work. Seriously, get the poor girl some pants.

Having addressed the decent and the regrettable, let’s now focus on those who go above and beyond. 2010 boasts four such beauties, beginning promptly with Miss January. While her top is a bit posed in that it clearly is meant to leave her left boob exposed (only to be safely covered by her baldric), she nonetheless sports a fun hat, sexy demeanor with blowing hair, and a lit grenado – so who’s to argue with that? Miss March is just cute as a button, not only for her fun clothes and bubblydisposition, but she’s also clearly trying to look sexy without falling over – it’s endearing, in its way, and any bloke should count himself lucky to find a pirate babe so eager to please even while off her balance.

Miss June brings a touch of the exotic manifest in the form of a tribal warrior woman. She looks mighty fierce, but the native gods clearly spared no expense in crafting her pleasing form – I just fear she’d kill me seven times over before I could overcome the language barrier. Our last stellar babes of the year are the pair of Miss Septembers. Clearly inspired by the dockside harlots from the Pirates of the Caribbean films, they are plenty easy on the eyes, and their come-hither looks are a refreshing break from the many hot pirate babes who clearly mean us harm (although the redhead seems strangely reminiscent of the 1950’s – I don’t know, maybe it’s the hair.)

As you can see, it’s a good year for those who enjoy aggressive women. However, I’m happy to note that most of the “Let’s Fight” girls manage to achieve their fierce expressions without resorting to the open-mouth scowls of earlier years – they manage to strike a much better “angry yet sexy” balance. “Let’s Party” has fallen right off the charts this year, and while some might argue that Miss March’s hoisting of a bottle of rum indicates a festive mood, my finely-honed skills tell me that the rum is only the means to an end in her mind, and that she has much more “devious” intentions. “Let’s Flirt” took an extreme drop from six in 2009 to only 2 in 2010, but the “Let’s …” jumped from zero to three. So all told, 2010 is definitely the year for aggressive women, be they warlike or, er, lusty. In short, watch yer backs, lads, it’s gonna be an exciting ride.