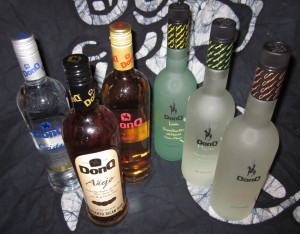 But when DonQ kindly granted me the opportunity to taste their entire line of standard and mixing rums, seriously, how could I decline? And thus we venture forth in what I believe is a Bilgemunky first – flavored rums!

I began with the DonQ Cristal, being the white, unaged, unflavored rum of the bunch. It smelled of a typical rum, but actually tasted slightly richer than I’d expected, with a decent hint of sugarcane flavor. Naturally Cristal lacks the complexities that would be expected in an aged rum, but it was surprisingly palatable in its own right.

Next up was DonQ Gold. A pale amber rum, Gold has been gently aged and carbon filtered to make for another surprisingly smooth mixing rum. Whereas many Gold rums are little better than pure rotgut, Gold is actually quite drinkable, and carries just a hint of overripe fruit. While I wouldn’t consider it an outright sipper, I can definitely see this rum lending some quality to a mixed drink.

DonQ Anejo is a midrange aged rum, and while it doesn’t reach the level of top shelf (stay tuned for Don Q GRAND Anejo, to be reviewed soon), it definitely serves as a quality sipper. A darker, richer amber, Anejo tastes of musky, overripe fruit and leather. It has a long, tingly finish that persists along the lips and roof of the mouth a surprisingly long time. Sugary sweet, Anejo is very much reminiscent of Solera rums, and might be enjoyed by those who appreciate finer, gentler rums.

Moving on to the flavored rums, DonQ Mojito tastes much as you would expect. Minty is its predominant flavor, and while the bottle didn’t list lime as an additional flavor I detected a distinctly fruity undertone nonetheless. Surprisingly full bodied on the tongue, Mojito has a warmth and robustness about it that contrasts with the light, refreshing mintiness I’d expected. Very good, and very surprising.

DonQ Limon is of course a lemony citrus rum. Very much like a noncarbonated citrus soda with a little something extra (rum!) In fact, of the three flavored rums listed here, Limon most strongly features the rum flavorings, whereas Mojito and Coconut all but disguise their alcohol natures.

Last up is DonQ Coconut. Upon opening the bottle, I admit I could have nearly melted into it – this rum doesn’t smell at all like coconut flavored rum, but rather it smells all out like coconut, plain and simple. It instantly conjures a longing for beach vacations I can’t afford. Smooth and tropical, this is definitely a tasty flavored rum.

I’d happily recommend any of these DonQ rums when making mixed drinks, and the DonQ Anejo is perfectly suited to enjoying straight up on its own. A fine batch of rums, and definitely worth checking out.

6 thoughts on “Review: The DonQ Collection”