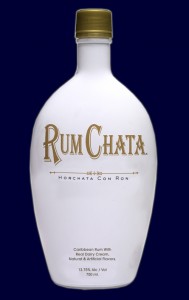 Not so with RumChata – this is as different from Bailey’s as rum is from vodka. Yes it’s white, and yes it’s creamy. But RumChata boasts an assortment of smells and flavors that I’ve never before encountered in a rum (or booze-cream) product. The key here is the “chata,” being derived from Horchata. Horchata, for those that don’t know (I didn’t know) is a Mexican/Central American treat made from rice, and this connection is immediately apparent when you poor yourself a glass of RumChata. The smell of rice – think rice pudding, not that stuff you mix with Chinese takeout – is by far the most prominent flavor, both to the nose and the tongue alike. But there is more – rum, vanilla, and cinnamon are also apparent, as is a hint of coconut (which actually isn’t present at all, but it’s just a trick of the rice.)

The limits to RumChata are pretty much boundless. I love it chilled on its own, but it’s also killer in coffee. I hear it can also be used to make a fantastic French Toast, which I heartily believe. And if anyone ever concocted a means of thickening it up to drizzle over rum cake, a single bite just might launch you into orbit. So wear a helmet.

If rum is the devil’s brew, then RumChata is clearly the vice of the angels.