Option 1: Steal a submarine – this would be the more piratey solution, but it poses two very serious problems, depending on what sort of sub you’re trying to steal. First, if you’re wanting to steal a luxury personal submarine, well, there’s just not that many of them out there. It’s tough to steal what isn’t there. Problem number two arrises if you’re going to bypass the sissy luxury subs and instead swipe a top-of-the-line military sub. This is tricky on several accounts, and since the Navy doesn’t seem to have much of a sense of humor about this getting caught can lead to all sorts of trouble. That’s why I recommend…

Option 2: Purchase an official Bilgemunky Discount Submarine– That’s right – Bilgemunky has decided to go into the submarine business for himself! For days now I’ve been experimenting with various models, mostly made from high-quality parts I scrounged up from my basement. I’ve had some amount of success, and am now confident that I can sell you a first-rate submarine for a fraction of the cost of more “traditional” sub dealers. I have several models to choose from. 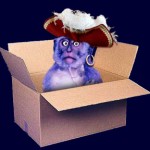 The Rum Runner 1000 is the perfect answer for the discriminating pirate who needs to cut back on expenses. It’s lightweight, durable, and can accomodate the average size monkey with room enough left over for a ham sandwich and life-jacket.

The Scurvy 7000 is the perfect blend of stealth technology and stale rum odor. Not quite as roomy as the Rum Runner 1000, this is the submarine of choice for the pirate seeking higher speeds and slightly slower leakage.

Prices on the Scurvy 7000 begin at $5,000. An optional snorkel/periscope attachment may be added for an additional cost. 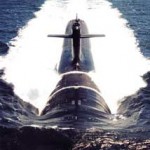 The Seamunky XP (eXtra Piratey) is the cutting edge in pirate submarine technology. Capable of diving to more than 800 feet and cruising at speeds in excess of 25 knots, this nuclear-powered vessel carries a full compliment of Mark 48 anti-submarine torpedoes as well as Tomahawk cruise missiles. Housing a crew of 130 men, this is the strongest, roomiest, stealthiest submarine money can buy. A deluxe model is available with a fold-in ashtray.

To purchase the Seamunky XP, please email for prices. Serious inquiries only!