I live in Wisconsin. This may come as a surprise to you, but Wisconsin is not exactly a hotbed of piratey activity. Sure, we have a “great” lake, and a few tallships, but no sea monsters, no whales, no desert island hideouts, and all of our rum has to be shipped in from far, far away. It’s just a part of life I’ve come to accept.

So imagine my surprise when I learned that Rum Chata, a new rum-cream product (keep an eye out for a review in the near future) is made a mere 20 minutes from my own home. SHOCK! And compound my excitement all the more when Tom Maas, owner of Midwest Custom Bottling invited me over for a firsthand tour of the operation. 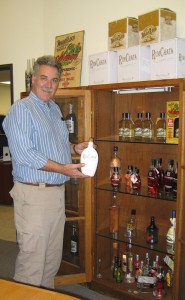 I suppose I should be clear in that Midwest doesn’t actually make the rum that goes into Rum Chata, nor do they make any of their alcohols – rather, they’re a mixing operation. In truth, mixing is something I’ve never paid much heed – too much experience with Bacardis and Malibus have left me with the impression that adding fruity flavors to booze is a way of masking its cheapness and selling the stuff to the less critical amongst us. Well, clearly this is often the case, but there’s also a flip side to the industry – and this is where the likes of Midwest Custom come in.

While my tour of the mixing and bottling operations was a tad on the quiet side (I arrived too late to see the machines in action), I did get to check out the vast assortment of beverages they created there – from Agave Loco peppered tequila to James River Plantation Sweet Tea Vodka and 4 Rebels Dragonfruit Vodka. While none of the aformentioned products are rum, I can’t recommend them enough if you’re in the market for something not-quite piratey. As to the Rum Chata (currently their only rum product, although others may eventually be in the works), you’ll read about that in full detail in the near future (spoiler alert – it’s phenominal!)