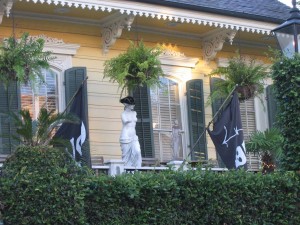 I’d fully intended to post on Saturday, but found the day get away from me all to quickly – and despite what you might guess, it wasn’t a Friday-night induced hangover to blame. Rather I found myself doing a bit more running to and from my condo to help some of the PyrateCon performers resolve some sound issues. Between that and making time for meals, the parade – and yes, perhaps just a little hangover nursing – Saturday came and went in a piratical blur.

Friday night saw the Dead Pyrate Ball at PyrateCon, as well as a seperate PyrateWeek Ball and a PyrateWeek Parade. Through sheer luck I happened to catch the parade, which was relatively short and notably passed directly through the PyrateCon grounds. The PyrateWeek Ball was very local based, with marching bands, several “real” and tourist pirates, and a few non-descript VIPs in cars (I believe the adjacent photo is of Lord David, a New Orleans pirate of some note.) 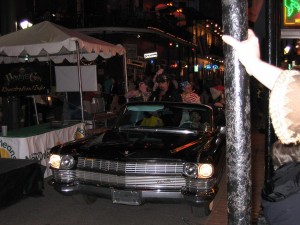 Following the parade I headed for the Dead Pyrates Ball which, as was the case with pretty much all the PyrateCon events, was trailing a bit behind schedule (food not yet arrived, sound system not set up, performers unsure what they were supposed to do when.) But also par for the course it all soon came together, first with some shanties by Skip Henderson and the Starboard Watch, followed by some DJing by yours truly, then a performance by the Bawdy Boys and capped off with The Pirates Charles (who, throughout PyrateCon and PyrateWeek proved with each and every performance that they’re not just a pirate band, but rather pirate musical super heroes.)

Perhaps the best feature about the Dead Pyrate Ball was its exclusivity. While the $50 ticket price (which included food and 5 drink tickets) may have been a bit too steep for all pirates to attend, it did nicely keep most of the general public out as well. Nothing against the public, but one of PyrateCon’s greatest strengths in the past has been the opportunity for pirates to hang out and party amongst their own. With PyrateCon 2009, the organizers have taken a much more visible, open-door policy to better encourage public participation. It makes some economical sense to do so, but the trade-off is a reduction of the “pirate convention” aspect in favor of a pirate street festival. But the Dead Pyrate Ball certainly did its part to let us debauch in peace for a time 😉 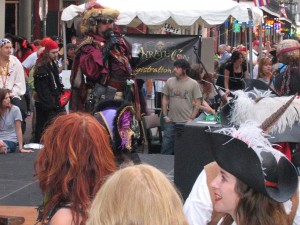 Saturday continued in the pirate street festival fashion, with musical acts scheduled throughout the day (although again, the schedule was a very loose approximation.) Downtime and announcements were handled throughout by the illustrious Captain Armando, who has a fantastic stage presence that pirates and public alike seemed to enjoy greatly.

Despite so many of the right elements being present – great music, plenty of pirate vendors, and plenty of pirates, PyrateCon during the day time did feel like a somewhat reduced experience. I think this may have had to do with the more spread out, public nature of the venue removing any sort of a natural central hangout, but rather created hordes of aimlessly drifting pirates. This is odd, because The Bourbon Oh Bar was pretty much meant to serve as an all day lounge, and was well located to do so. But some stars must have been out of alignment as it never quite lived up to this potential. 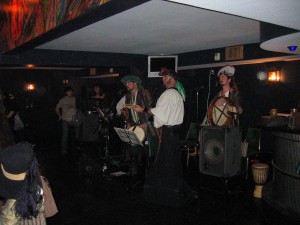 Night time was a different matter, however. Some of the bands noticed a gap in the Saturday evening events – namely that there wasn’t anything really scheduled. And so The Bawdy Boys, Captain Black’s Sea Dogs, and The Pirates Charles took it upon themselves to set up an improv stage and fill the Bourbon Oh with proper pirate music for the evening. As a result the place was more than packed with pirates and tourists alike – all dancing, drinking, and jamming to some of the best Pirate-Core music around.

It’s now Sunday afternoon as I type this, and the atmosphere is one of definite exhaustion. Technically PyrateCon is still on, but it’s definitely in a wind-down phase as folks recover from several nights of hard partying, and others pack up and catch early flights. PyrateWeek and PyrateCon have definitely been some great times – I didn’t get to experience as much of PyrateWeek as I’d have liked, partly because of the flu, and partly because of its slightly remote location and conflicting schedules. But, like most attendees once the weekend hit I barely noted the difference between the two – just show me where the pirate party is.