So the Bilgemunky’s Birthday is coming up (Aquarius by old Zodiac, Capricorn by New Zodiac, and Monkey with a Brace of Pistols according to The Pirate Zodiac [via Pirattitude! by The Pirate Guys.]), and my special birthday wish is for no parrot to be left behind. Actually, I wanted rum and a new blunderbuss, but there wasn’t a good charity for that.

So aye, take a moment and drop some coin for the birdies sake! The charity is Parrots First, and I’m hoping to raise $250 by Friday!

And, for your amusement, here’s a short series of pictures where Captain Dan and a parrot seem to be in perfect sync during a concert 🙂 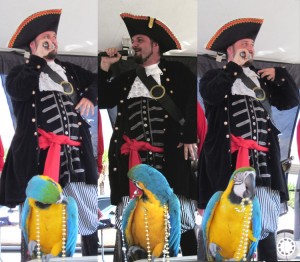