It’s been one hell of a summer – plenty of heat to make the rum all the sweeter, and a couple of pirate festivals thrown in for good measure.

This past May I put Bilgemunky Radio on a summer hiatus. The reasons for this were twofold. First off, I was having hardware issues that made it increasingly difficult to broadcast a quality show. Taking the summer off gave me the time I needed to evaluate the situation and consider possible solutions. END_OF_DOCUMENT_TOKEN_TO_BE_REPLACED

During last night’s broadcast I announced an upcoming format change to Bilgemunky Radio. Starting Monday, September 13th, Bilgemunky Radio will begin one hour later (9 pm CST.) The show will remain two hours of pirate music awesomeness, but there will be no more Bilgemunky After Dark.

The reasons for this are many, but the short of it is that I need to consolidate the show to two hours for homestead reasons. And AD, for me, is the *extra* – it doesn’t have nearly as much music, it draws only a fraction of the listeners of the regular show, and for me it’s not as creatively inspiring as the rest of Bilgemunky Radio. So it makes sense for it to be cut. Unfortunate perhaps, but at the end of the day multiple factors all point to the same thing – remove AD and instead focus on what matters most – Bilgemunky Radio proper.

I hope this news doesn’t strike too many listeners as tragic – rest assured Bilgemunky Radio will continue to muscle on, and very little music will actually be lost – probably not even 100 songs (with Bilgemunky Radio boasting nearly 2,000). The regular show is, afterall, intended for pirates – and lacks not for debauchery, rum abuse, and all sorts of other misbehavior 😉

What fun we had. What dreadful, sinful fun. And I only coughed a little bit. Cripes, how much rum do I have to drink to finally kill this cough???? END_OF_DOCUMENT_TOKEN_TO_BE_REPLACED 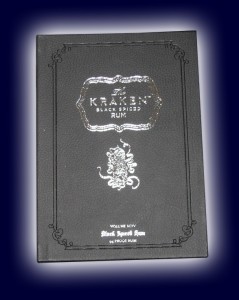 Ever since I bragged on the extraordinary promo package I received from Kraken Rum, readers have emailed me to express their salivations for the package’s crown piece – the BOOK. Chock full of words and illustrations depicting the anatomy, history, and myth of the kraken, as well as anti-kraken weapons and drink recipes, this hardbound book is a must for any piratey rum fantatic! They’re precious hard to come by, but I have been fortunate enough to come across a spare – and it could be YOURS!

Tune in to Bilgemunky Radio this coming Monday night for your chance to participate in the bloody competition. Plan to listen close, shoot in an email or several, and wrack your brain for info about Kraken Rum, the kraken itself, and Bilgemunky Radio! Contest entry will be locked shortly after the program begins, so don’t be late! 8 pm, CST!!!

Holy cow, we gave a lot of great swag away tonight! Special thanks to Kilo Kai for their support in this! And congrats to all the winners. Tune in next week for a special contest with a prize from Kraken Rum! END_OF_DOCUMENT_TOKEN_TO_BE_REPLACED

Sweet, new Mizzen. Wait, not sweet – it was sad. We felt violated. Like, in a bad way. But we also had good times. Do you remember the good times? Me neither – I’m still dwelling on Pirate Magic. END_OF_DOCUMENT_TOKEN_TO_BE_REPLACED

Harle! We played pirate music, and it was good. After Dark had a sponsor, and it was not good. The universe once again establishes equilibrium. END_OF_DOCUMENT_TOKEN_TO_BE_REPLACED

Yar de yar har har. We rocked, we rolled, we stumbled about the decks and tried to stay out of the drink. END_OF_DOCUMENT_TOKEN_TO_BE_REPLACED

Tonight we learned, we loved, and we drank. Rum. END_OF_DOCUMENT_TOKEN_TO_BE_REPLACED