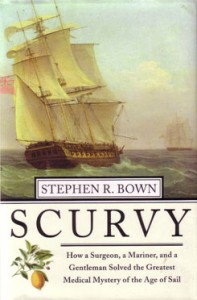 Stephen R. Bown covers the story of scurvy and the quest for its cure by tracing the efforts of three distinct individuals – James Lind, James Cook, and Gilber Blane (the surgeon, the captain, and the gentleman, respectively.) These men’s stories each make for a gripping read, and together they tell a fascinating tale about a terrible affliction that not only crippled its individual victims, but entire navies as well. Throughout most of history, long voyages manned by malnourished sailors short on Vitamin C inevitably gave way to a variety of dreaded symptoms, from spongy, bleeding gums to decades old wounds reopening. It’s easy to see how scurvy rose to such infamy, especially in days before nutrition was widely understood, and its cause was routinely attributed to unrelated factors such as poor sanitation or impurity of thought. END_OF_DOCUMENT_TOKEN_TO_BE_REPLACED