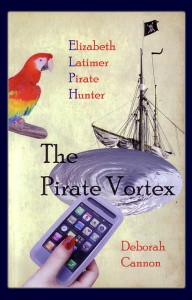 While the heroes of the story are quite modern, the journey largely is not. Yes, time travel is involved, and never before in a pirate adventure have I seen the modern in such stark contrast with the historical. The narrative of this story, much like its heroes, is a clear product of modern materialism and technology. Scuba gear, iPhones, Swatch Watches, text messaging… END_OF_DOCUMENT_TOKEN_TO_BE_REPLACED