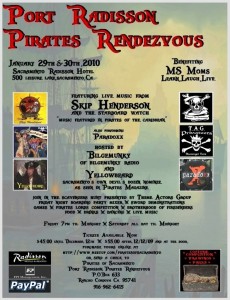 Last weekend I had the great pleasure of attending the Port Radisson Pirates Rendezvous in Sacramento California, and it was a blast! The festivities began on Friday night with a meet&greet party in the hotel’s bar and back patio, and after a slow start it quickly got to kicking with dozens of well-dressed pirate enthusiasts. We did have to share the bar with some non-pirates (some of whom were more keen than others on sharing barspace with pirates), but for the most part a fun and festive atmosphere was maintained. Entertainment was provided by the Brotherhood of Firebenders (an interesting name, being as this group seems to be 80% female), who spun flames out on the back patio first, and then spun glowy things indoors a bit later (silly California fire codes.) But primarily the attraction this night was fellow pirates chatting, drinking, and dancing (especially when someone finally convinced the house DJ to slip some Pirates Charles into his mix.) END_OF_DOCUMENT_TOKEN_TO_BE_REPLACED